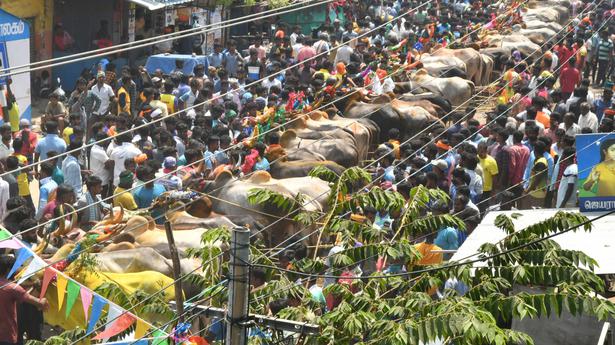 A man gored to death during a bullfight in Krishnagiri

A 45-year-old man was gored to death during a bullfight staged with permits, but unsupervised by authorities, at Old Pet in Krishnagiri on Monday.

The victim, Rajesh from Tirupattur, was among hundreds of spectators who had gathered at the event.

The event saw bulls lined up in the scorching sun, even without drinking water, in violation of the standards for holding such an event. Organizers had taken over Netaji Road diverting traffic. Tokens were issued for ₹5,000 and up once again in violation of numerous caveats for running the race. The event comes following the Tamil Nadu government’s imposition of a ₹500 fine for flouting the mask rule in public places.

Livestock co-manager Rajendran initially denied there was a breach. When asked if there was an animal care committee on site, he said there was. However, when it was pointed out that the venue was overcrowded in complete violation of the standards set by the collector-led consultative meeting on Jallikatu and Erudhattamwith photographs of the event as visual evidence, Mr Rajendran said the assistant animal husbandry manager, Muralisanthanantham, was in charge of the event.

When contacted, Dr Muralisanthanantham said only one department was ill-equipped to carry out surveillance, although an animal care team with doctors was present. Asked about the inherent cruelty to animals, the official said the district administration gave permission for the event.