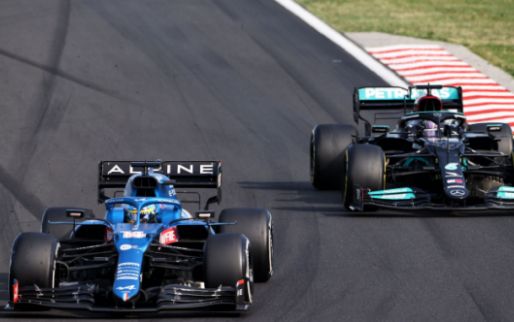 The battle between Fernando Alonso and Lewis Hamilton was one of the highlights of the Hungarian GP. The Alpine rider managed to keep the world champion behind him for several laps, allowing his teammate Esteban Ocon to eventually win the race.

A block by Alonso eventually allowed Hamilton to pass, but the two fought wheel to wheel and even touched. “I honestly thought I couldn’t hold him for more than a lap or two, but in the last two corners he seemed a bit struggling to keep up with me. Then it was enough to pull a gap down the straight and to defend, “ Alonso said Autosport.com.

Red Bull review: “Why not play with Verstappen on slicks? “

“I think he learned a few different lines in the last three corners after the 10 laps behind me. He could only pass Carlos in one lap, applying those new lines.” So, according to Alonso, Hamilton adopted his top line in the last sector, allowing him to quickly overtake Sainz.

Alonso thought the podium was achievable

Alonso continued: “I probably had the pace to win the race, or that’s what it looks like when you see the layout of the race. [After closing the gap to Sainz], I was so convinced of the podium. I was doing the best laps of the race and thought I would overtake them and try to win the race. It was my mind then. “

“Then I started to realize that maybe winning the race was not possible. I started to think at that point that if I was right behind Carlos with the DRS, I could protect myself from Hamilton and finish fourth “, Alonso said. In the end, he finished fifth, his best result of the season.