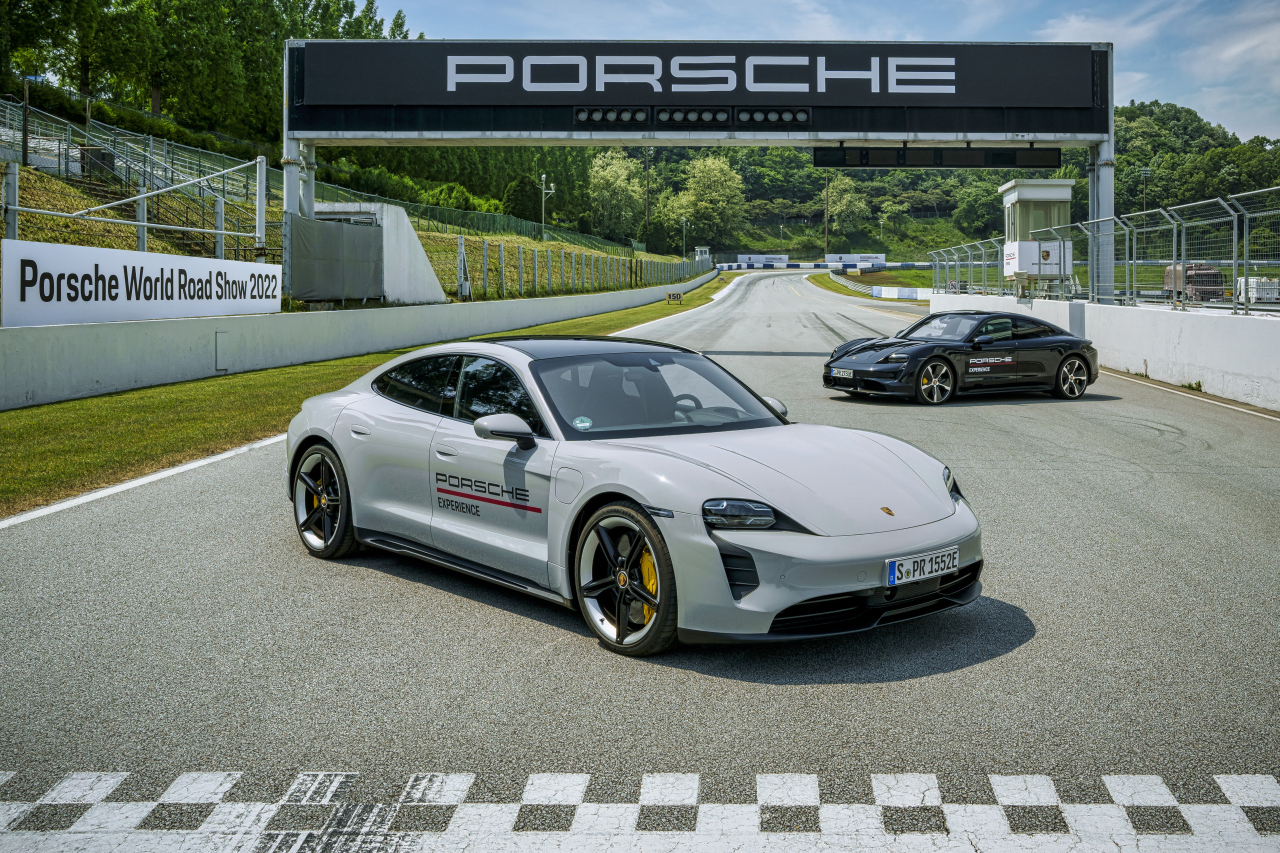 By Pamela R. Sim Last updated May 26, 2022
Share
The Porsche World Roadshow, with various driving programs such as circuit driving, slalom course and launch braking offered by the German automaker, resumed in South Korea on May 19 after skipping a year due to the COVID-19 pandemic.

Porsche Korea had about 28 models, including the Taycan GTS, a model yet to be launched in South Korea, lined up for testing at Everland Speedway in Yongin, Gyeonggi Province.

The Taycan GTS definitely caught the eye of the event, as it’s not only the first Gran Turismo Sport (GTS) version of Porsche’s all-electric car, but also the first time the model has been tested. in the country.

The four-door electric sports sedan has been beautifully styled with a blacked-out chin spoiler and enlarged air curtain ducts below the black-screened headlight deflectors.

On the sides, deep side skirts with gloss black inserts accentuate the car’s body color.

Porsche used its Race-Tex faux suede material on the car’s interior, including the steering wheel and seats to give the driver better grip.

Driven on the circuit, the Taycan GTS showed its full potential as a racing car with a maximum of 598 horsepower unlockable in overboost thanks to two electric motors, one for the front axle and one for the rear.

It can reach 100 kilometers per hour from zero in 3.7 seconds.

Testing the Taycan GTS launch control was breathtaking, as it was almost like setting off on an airplane.

The instructor on the scene explained that a regular car cannot perform the same thing when the launch control is tested several times in a row.

But the Taycan GTS, he added, can ramp up to its maximum power even when continuously tested throughout the day, thanks to its high-end engines.

Equipped with a rear axle steering system, it was easy to turn around on a narrow road with the Taycan GTS.

It was also easy and safe to make sharp turns around the corners of the circuit, as the car could reduce movement of the vehicle body thanks to its adaptive air suspension system.

Pricing and launch date for the Taycan GTS in South Korea are yet to be determined.

The Porsche World Roadshow is open to the public until the end of this month.