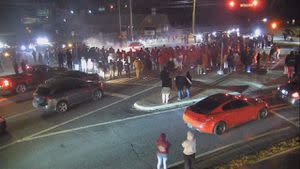 Police have released crystal clear new video of hundreds of people gathered at the intersection of Buford Highway and Old Peachtree Road to watch as cars dragged by.

The video shows the arrival of the police and the chaotic scene unfolds in real time. Police said five people were arrested at the event.

Duluth officer Ted Sadowski said he hopes the video will make people stop and think twice about holding auto events in his part of town.

“Hopefully this gets the word out that Duluth isn’t playing,” Sadowski said. “These drivers may not have realized what they were up against. The City of Duluth has 347 cameras spread throughout the area.

Sadowski said that in addition to the cameras, the tag readers allow officers to easily follow the path of cars that are driving away and identify some of the drivers.

Edilson Ordonez, 19, was arrested. Four other drivers have been charged but have yet to be found after police used photos of tag readers to identify the cars.

Duluth police said they held another street racing event before this one, but it had nothing to do with the most recent one.

“There were people standing in the middle of the road, between the cars as they were hanging around,” Sadowski said. “A guy is hanging out the window right now. In the back of the trucks, through the window, no seat belts.