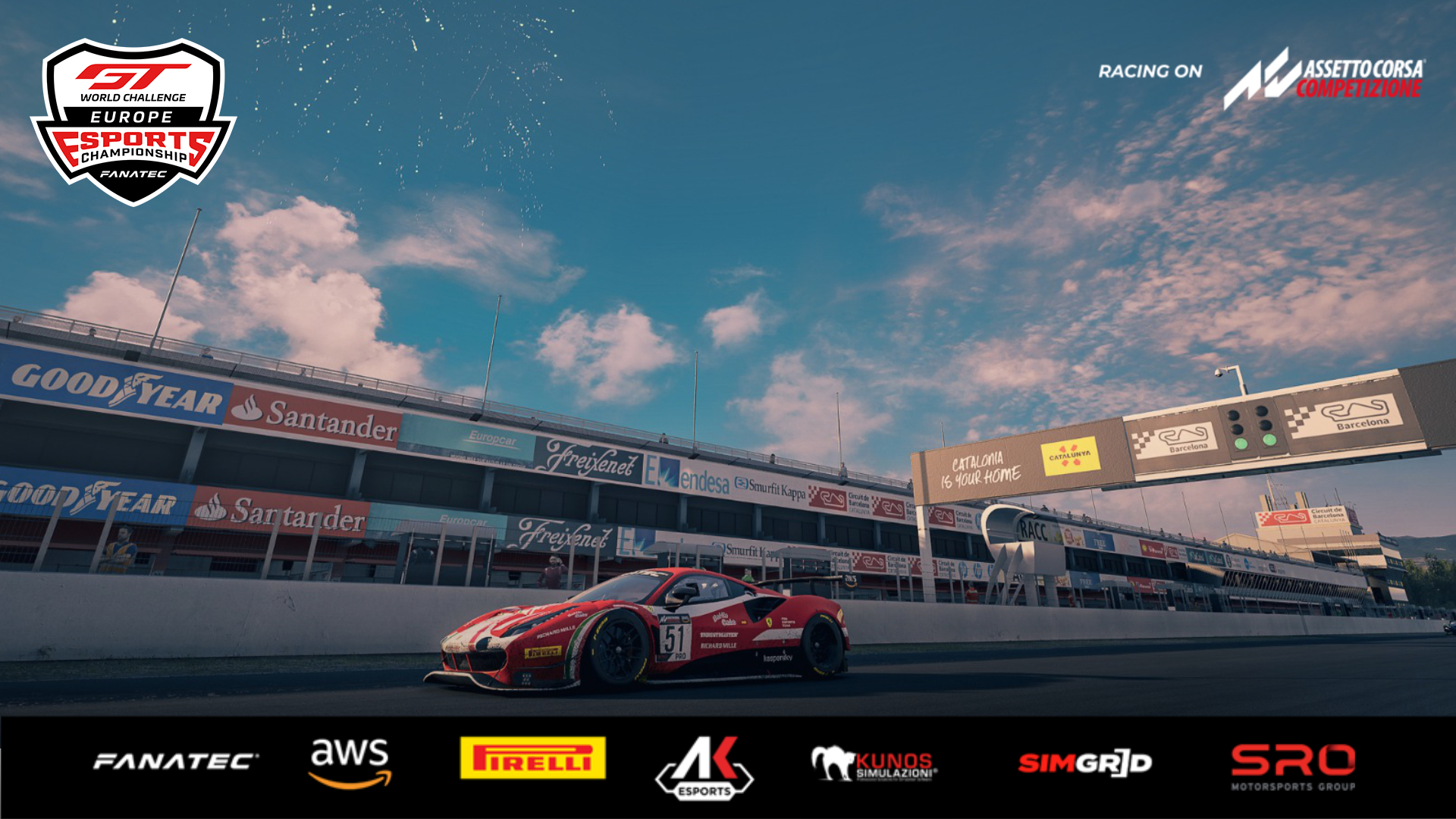 • The Ferrari team takes the crown despite the resounding victory of their rival for the title
• The protagonists of the championship finish one-two, BMW SIM G2 Esports completes the podium
• List of participants | Qualifications | Result | Ranking

But the Ferrari team was made to sweat as rival Racing Line Motorsport won the three-hour competition, staged on Assetto Corsa Competizione, in a dominant fashion. Maintaining the momentum that started with their victory last time at the Nürburgring, the crew of the # 191 Bentley took pole for the final to stage a decisive showdown on the Spanish track.

The No.51 Ferrari took fourth place on the grid, but the same result would not be enough to secure the championship if Racing Line could convert pole to victory. And with three hours of frantic simulation ahead, nothing could be taken for granted.

As the Bentley got off to a good start and maintained its lead, Ferrari was in the thick of the action as Giovanni De Salvo made contact with third starter Mikhail Statsenko (# 147 YAS HEAT McLaren). The latter sped to the left, causing chaos as the peloton charged, while De Salvo was able to continue unscathed.

There were moments of tension for the FDA Esports team as stewards wondered if further action was needed, but ultimately the Italian crew was able to breathe a sigh of relief as the incident went unpunished. The race quickly calmed down, Marek Schinz comfortably moving away behind the wheel of the dominant Bentley # 191.

At this point the Racing Line team was doing whatever it needed, but De Salvo was also in the FDA Esports Ferrari. After 40 minutes he passed JOTA’s # 38 McLaren for second place, further strengthening his team’s title bid. Schinz remained behind the wheel of car # 191 for the second hour, while David Tonizza took over the Ferrari. There was no change in the dynamics of the race, as the Bentley still had the pace to extend its advantage up front.

Kevin Siclari took over the lead car for the last hour, while De Salvo climbed back into the Ferrari and the Bentley pulled away again. Indeed, it was a perfect performance from the Racing Line team, but with the FDA machine holding P2 and no pressure from behind, it wasn’t quite enough to snatch the championship.

Siclari crossed the finish line more than 30 seconds ahead of De Salvo, securing a dominant victory for his side. But, once the No.51 Ferrari passed the checkered flag in second place, the championship was no longer in doubt: FDA Esports could celebrate securing the crown with just five points.

Behind them, the n ° 62 BMW SIM G2 Esports completed the podium thanks to Arthur Kammerer and Gregor Schill. Kammerer moved up to third as he passed JOTA’s # 38 McLaren after an hour, reacting quickly when a overtaken car nearly came to a standstill in the race at Turn 1. He then battled Robbie Stapleford for several turns. before completing the pass. , having finally escaped well to secure the second podium of the campaign for his team.

The # 38 McLaren crossed the finish line in fourth, but a 15-second penalty for a Zoom camera violation brought the Stapleford / McGregor car back to sixth in the final standings. This promoted the # 4 Mercedes-AMG Haupt Racing Team Schindler Mercedes-AMG to fourth, giving the car driven by Müller / Hitz the best result of the 2021 Endurance Series season, while GPX Racing by Rennwelten (Ibraimi / Hoeke ) was the best Porsche in fifth. .

The penalized McLaren was next in P6, while Simonini / Houben’s # 157 Sainteloc By R8G entry marked the best result of the season for an Audi taking seventh place. The No.14 Mercedes-AMG Unicorns of Love (Richter / Kisser) is eighth, followed by the No.34 Predator Simracing By R8G – which makes its first scoring appearance this season thanks to Harteveld / Nerbi – and finally the no. ° 121 Odox Motorsport Audi shared by Spanish drivers Gerard Martínez and Nicholas Albaladejo Camins.

Today’s race closed the curtain on all five Endurance Series races, with each event taking place one week after the Fanatec GT World Challenge Europe Powered by AWS Endurance Cup. FDA Esports secured four podiums during the campaign, missing only the Nürburgring. The Italian squad is undoubtedly a worthy champion, even though Racing Line Motorsport has proven to be the class of the peloton in the last two rounds, winning back-to-back triumphs at the Nürburgring and Barcelona.

Although the Endurance Series is over, there are still two rounds left in the GT World Challenge Europe Esports Sprint Series, while there is also further action to come from the Continental Championships in Asia and America. Each category is part of an expanding esports presence organized by SRO Motorsports Group in partnership with Fanatec, Kunos Simulazioni, AK Esports, Pirelli and The Sim Grid. They are complemented by the revolutionary Fanatec Esports GT Pro series, in which professional GT drivers score points for the Fanatec GT World Challenge Europe Powered by AWS Team Championship.