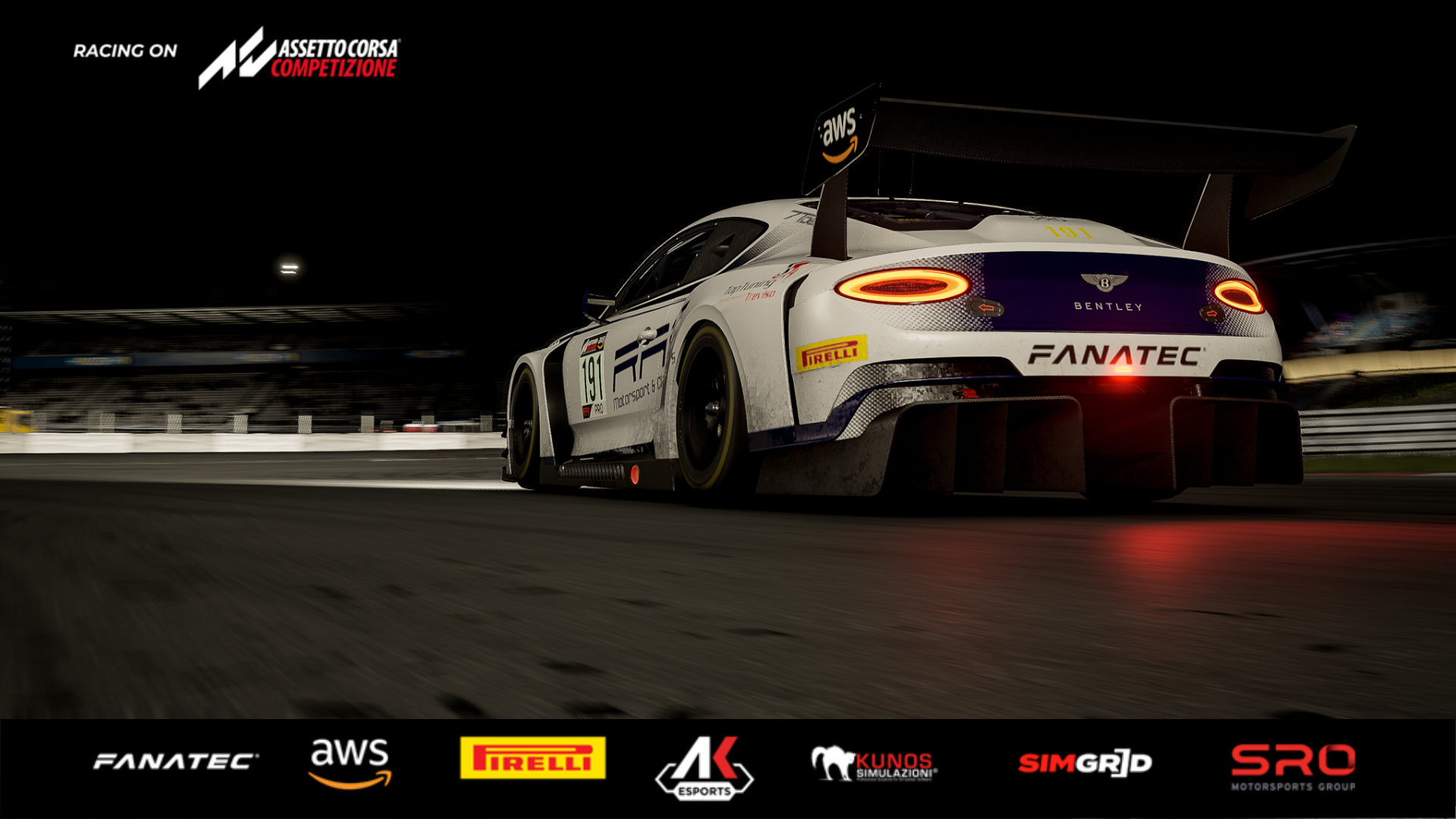 The battle for the inaugural GT World Challenge Europe Esports Endurance Series title will be on the edge after a spectacular six-hour race at the Nürburgring that saw the gap close at the top of the standings.

The # 191 Racing Line Motorsport Bentley took home the checkered flag and crucial 25 points, but not before several others led on the German circuit. With heavy rain falling and the in-game clock running from 6:00 p.m., it was clear this would be one of the most action-packed events of the season.

The drama began immediately when the # 62 BMW SIM Racing G2 Esports car cut through the Bentley, rotating the front row starter and earning itself a penalty in the process. If that wasn’t enough, the championship-leading FDA Ferrari Esports team found themselves with nowhere to go and made contact with the Bentley, causing damage to the 488 GT3 and dropping David Tonizza at the bottom. of the order.

At this point, it seemed highly unlikely that the Racing Line Motorsport crew from Siclari / Schinz / Erbrich would fight for the win. The Audi Saintéloc by R8G led the first stint from pole, with Tobias Pfeffer leading the pack. Audi remained in control when Pfeffer passed the baton to Giorgio Simonini for the second hour, but double stint Tobias Gronewald (# 14 Unicorns of Love Mercedes-AMG) was on the prowl.

After closing the Audi, Gronewald took the lead with an aggressive swing at Turn 1 just past the 90 minute mark. The Mercedes driver then received a five-second penalty for overtaking, but had already cleared at this stage. Its advantage was further increased when the # 157 Audi spun through gravel due to a technical problem, ending another good race for the Saintéloc by R8G crew.

The # 14 Mercedes now seemed to be in control, but at the next stop the Unicorns of Love team made the surprising decision to put on slick tires while the track was still wet. This made life extremely difficult for Lars Kisser, who lost a considerable amount of time and retired from the race in the third hour. The beneficiary was the # 88 VRS Coanda Simsport Porsche, which took the lead and seemed comfortable leading the pack. The rain has subsided, but not quickly enough to give Unicorns of Love the edge they were hoping for.

It was then the turn of the Coanda team to encounter problems: one member of each of its crews was unable to participate in the race, which contravenes the rule that the teams must field three drivers. Thus, the # 18 and # 88 Porsches were both disqualified, propelling the # 191 Bentley in the lead. The team had made steady progress after the first lap and gained ground by doubling their tires as the rain subsided. Kevin Siclari had taken second place shortly after halfway and when the No.88 Porsche was disqualified the Bentley took the lead.

At this point, the race for victory has set in. After taking first place in qualifying, it’s no surprise that the # 191 Bentley had the pace to take the lead in the second half of the race. Marek Schinz was behind the wheel for the last hour, taking the checkered flag to give Racing Line Motorsport a superb comeback victory, as well as a vital 25 points in the championship.

While there was no drama at the front, the battle behind became more frantic as time went on. The final laps found James Baldwin (Team Rocket RJN) in electrifying form when he passed Jack Keithley (Williams Esports Aston Martin) for third place with 35 minutes remaining, then crushed Jaroslav ‘Jardier’ ​​Honzik (YAS HEAT McLaren) for second place. But the experienced Jardier was in supreme defensive form and kept Baldwin sidelined in the finals. The Briton finally finished his movement on the last lap of the race, but Jardier came back strong and came closer after Baldwin went too far at the chicane. There was contact, causing the RJN car to spin as Jardier continued.

Obviously, the collision went to the stewards, who penalized the driver YAS HEAT. This gave Unicorns of Love second place, despite starting the last lap in fourth place, while Baldwin took third place for RJN and the YAS HEAT team had to settle for fourth place.

After entering the race 37 points from the championship lead, Racing Line Motorsport is just 12 points away from next month’s final after FDA Esports failed to score at the Nürburgring. The No.51 Ferrari never fully recovered from the first lap contact and seemed uncomfortable in the wet. It improved when the track dried, but then retreated significantly in the final stages. The # 18 VRS Coanda Simsport Porsche also remains in the race despite today’s disqualification, 19 points ahead of the FDA crew.

The title will therefore be played in a three-hour race at the Circuit de Barcelona-Catalunya, which will close the inaugural campaign of the GT World Challenge Europe Esports Endurance Series on October 16. The championship is organized by SRO Motorsports Group in partnership with Fanatec, Kunos Simulazioni, AK Esports, Pirelli and The Sim Grid.