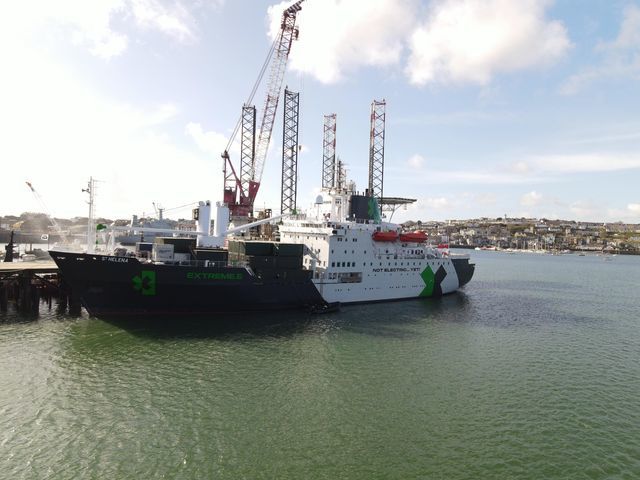 Aerial photos of the vessel which carried Lewis Hamilton’s racing car into Falmouth Docks yesterday were shared with the Packet by South West Sky Visions.

The stunning aerial photos were taken today as St Helena is Extreme E’s new floating paddock for the organization’s thrilling motorsport racing series in five remote and often hostile territories around the world.

The new sport is an FIA-sanctioned international off-road racing series that uses specific electric SUVs to race in remote areas of the world, such as the Amazon rainforest or the Arctic.

Motorsports fans can follow the Extreme-E racing series when it debuts on the BBC and Sky TV next month.

Named after Lewis’ racing number, X44 will enter Season 1 of Extreme E, but Hamilton will take a step back in addition to giving advice and not being involved in day-to-day operations while focusing on his Formula 1 races. 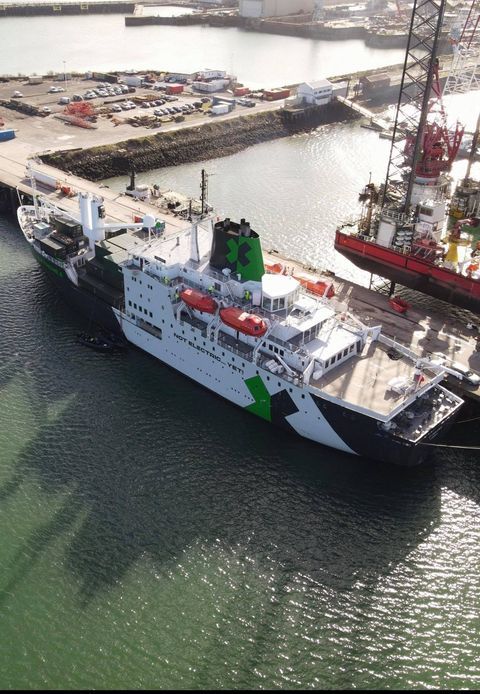 St Helena arrived at Falmouth Docks from Liverpool on Monday after a two-year, multi-million pound refurbishment project at the Cammell yard in Birkenhead.

She was one of the last ships in the UK to carry the prefix RMS (Royal Mail Ship) in front of her name. Built specifically to provide a lifeline to the islanders of Saint Helena and Tristan da Cunha, the British-built vessel served the islands well until a new airport was built on Saint Helena.

The vessel has tangible links to Falmouth as it was once managed by Curnow Shipping Limited from their Killigrew Street office.

From Falmouth, the ship heads east for Saudi Arabia where the inaugural Desert X-Prix motor race begins on April 3.

After Saudi Arabia, it will cross the Mediterranean back to Senegal (Ocean X-Prix), cross Greenland (Arctic X-Prix), descend to Amazonia (Rainforest X-Prix) then further south to the final destination of the season in Tierra del Fuego, for the Glacier X-Prix.

The five locations are all chosen to highlight a range of ecological issues that each region is facing due to climate change. Using the latest technology in addition to watching the race, audiences will learn firsthand about the environmental issues affecting each region that Extreme-E wishes to support through scientific studies.

In addition, there are 62 cabins that can accommodate up to 175 people, two lounges, an 80-seat restaurant, a 100-seat outdoor deck, an 80-seat presentation area and a carrying capacity of 90 sea containers of 20 feet. A crew of 50 will live and work aboard the St Helena during her voyage. There is also a hydroponic system on board in the galleys which will allow the chef to grow the ship’s own herbs and garnishes.

Under the management of Curnow Shipping, the vessel has called here a few times to load cargo and drydock. The company operated the two vessels of the name from 1977 to 1999. Then under the specific direction of the then Secretary of State in the Department for International Development in December 1999, Curnow Shipping Limited, which had been given the management of ‘a £32 million subsidized passenger freighter was, at its request, excluded from tendering for the fourth contract to run from August 2001. Andrew Weir, a well-known international shipping company then took the reins.