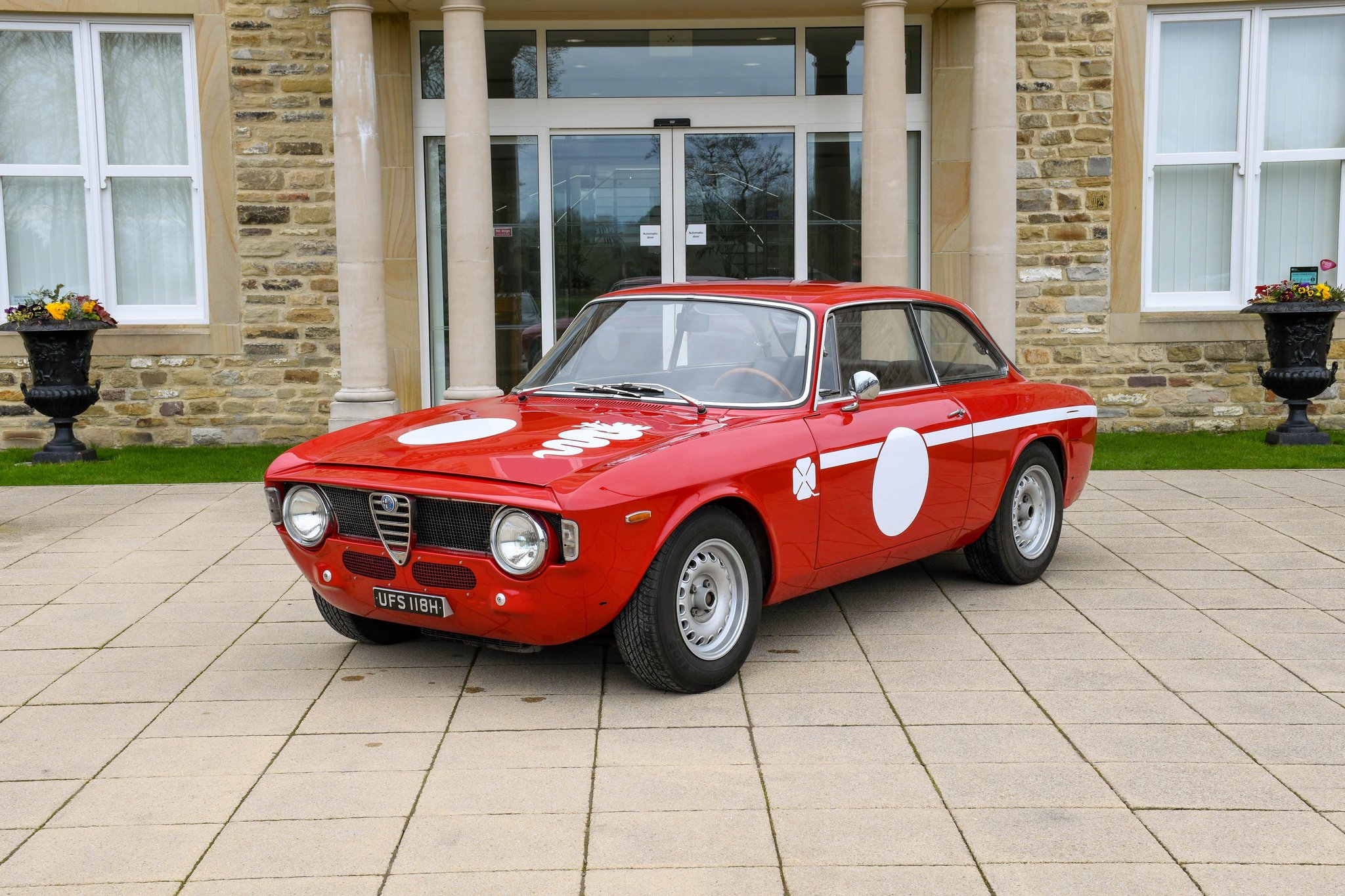 Once used as a getaway car in Italy, the GTA 1300 Junior has been carefully restored for use as a road car and retains the distinctive red ‘Alfa Rosso’ livery with white details.

Alfa Romeo is a brand that has long been associated with motor racing excellence.

The company was founded in Milan in 1910 as ALFA (Anonima Lombarda Fabbrica Automobili), which was taken over in 1915 by Neapolitan entrepreneur Nicola Romeo who would change the name to Alfa Romeo in 1920. Alfa ran its first car, the 24HP, in 1911 and continued to build sports vehicles and was heavily involved in Grand Prix racing, Formula 1, sports cars, touring cars and rallies.

From the 1960s, Alfa Romeo raced cars modified from general production models, and their legendary Gran Turismo Alleggerita (GTA) was a redesign of its successful Giulia coupé into a lightweight racing car, using materials specials and highly developed engine modifications.

The GTA 1300 Junior, of which the current car is a fine example, was designed to enter the racing categories for smaller displacement engines where it enjoyed great success. The GTA 1300 Junior was a more affordable and cheaper to run sports car, available as a standard road car or modified for the race track.

Although the debut of the current car is unknown, it appears to have been originally raced in Italy, with the base retaining evidence of race modification.

However, it was later converted back to road use. After being used as a getaway car, it ended up in a police impound in Rome, where it was spotted by GTA specialist Richard Banks in 1987, who acquired the car on behalf of the current owner.

A piece of Italian racing history, the Alfa Romeo GTA 1300 Junior offers the option of owning a classic road car, or it could be easily converted into a historic race car for track use.

The Alfa Romeo will be presented to the public on Thursday 12 and Friday 13 May from 10 a.m. to 5 p.m., alongside all the other lots in the sale.

Prices quoted are an estimated hammer price, which is subject to a buyer’s premium of 10% plus VAT on cars and motorcycles and 22% plus VAT on all other lots.

A fully illustrated catalog will be available on the Tennants website at www.tennants.co.uk ahead of the sale.

Tennants Auctioneers is a fourth generation family business and one of the UK’s largest international antiques and fine art auctioneers.

Based in Leyburn, North Yorkshire, Tennants hold over 80 sales a year and connect over 200,000 buyers and sellers a year.

In 2014, Tennants expanded its auction center to 80,000 square feet with the development of The Garden Rooms – a venue dedicated to events, weddings, conferences and exhibitions.

The venue is one of the largest event spaces in the region with a capacity of over 600 people.

The venue’s next event will be the popular bi-monthly Antiques and Interiors Sale on April 29.

These sales attract a loyal following of repeat buyers and are a good source of 20th and 21st century collectibles. Including a mix of traditional art and affordable antiques, jewelry, watches and more, Antiques and Interiors sales are a great place for first-time buyers to start their collection.