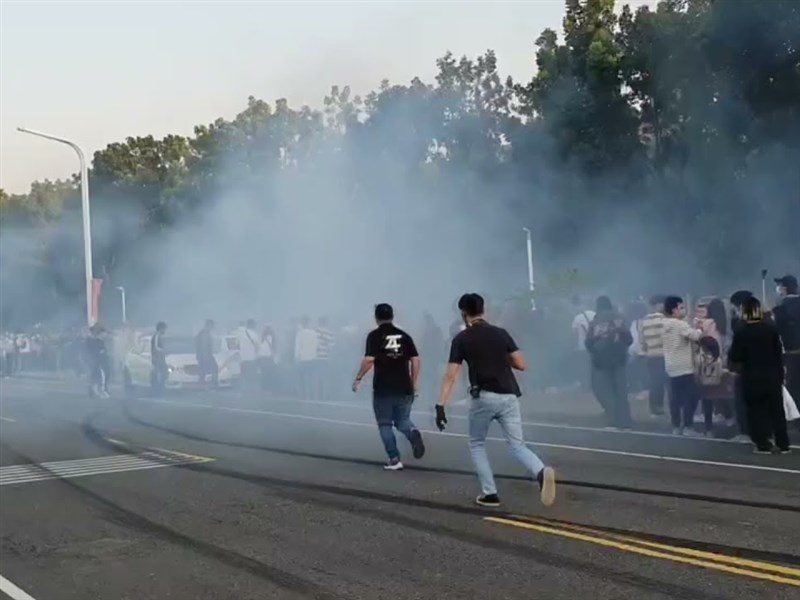 Taipei, December 4 (CNA) Six people, including a pregnant woman, were injured on Saturday when a car hit a crowd of spectators at a drag racing venue in Douliu, Yunlin County.

Pregnant woman suffered minor abrasions and abdominal pain when she fell, as crowds tried to disperse when a Mercedes Benz swerved during a race against a Mitsubishi to test their 0-400 kilometer per hour over a distance of 100 meters.

There was no guardrail at the site and the car struck onlookers, injuring six people, who were rushed to nearby hospitals.

One of them is said to have suffered bone fractures which required surgery. This person, along with the pregnant woman, was still in hospital, while the others had been released at the time of publication.

The crash happened near the start line, meaning the vehicles were not at full speed when the white Mercedes Benz crashed into the crowd.

The drag racing event, co-hosted by the Douliu Municipal Office and the Yunlin Visitors Association, took place in a public space, where streets had been closed and spectators allowed to congregate.

Douliu Mayor Lin Sheng-chueh (林 聖 爵), who visited the crash scene and the victims, said safety protocols were put in place before the two-day broadcast and were being broadcast on a intercom before each race.

With larger crowds than expected, however, it became difficult to maintain all security measures, said Lin, who had promoted the event in video clips before it started on Saturday.

According to Yunlin County Councilor Chiang Wen-teng (江 文 登) of the Progressive Democratic Party, the Douliu municipal office was to blame for a lack of proper organization.

Not only did the provisions put the public at risk, but they allowed noise pollution, as many vehicles were allowed to travel at high speeds on public roads, Chiang said.

The event was scheduled for December 4-5, with scheduled races and auto shows featuring imported racing cars and tuned vehicles, but following the accident, Mayor Lin announced that all races and all shows had been canceled.

(By Chiang Yi-ching and James Lo)