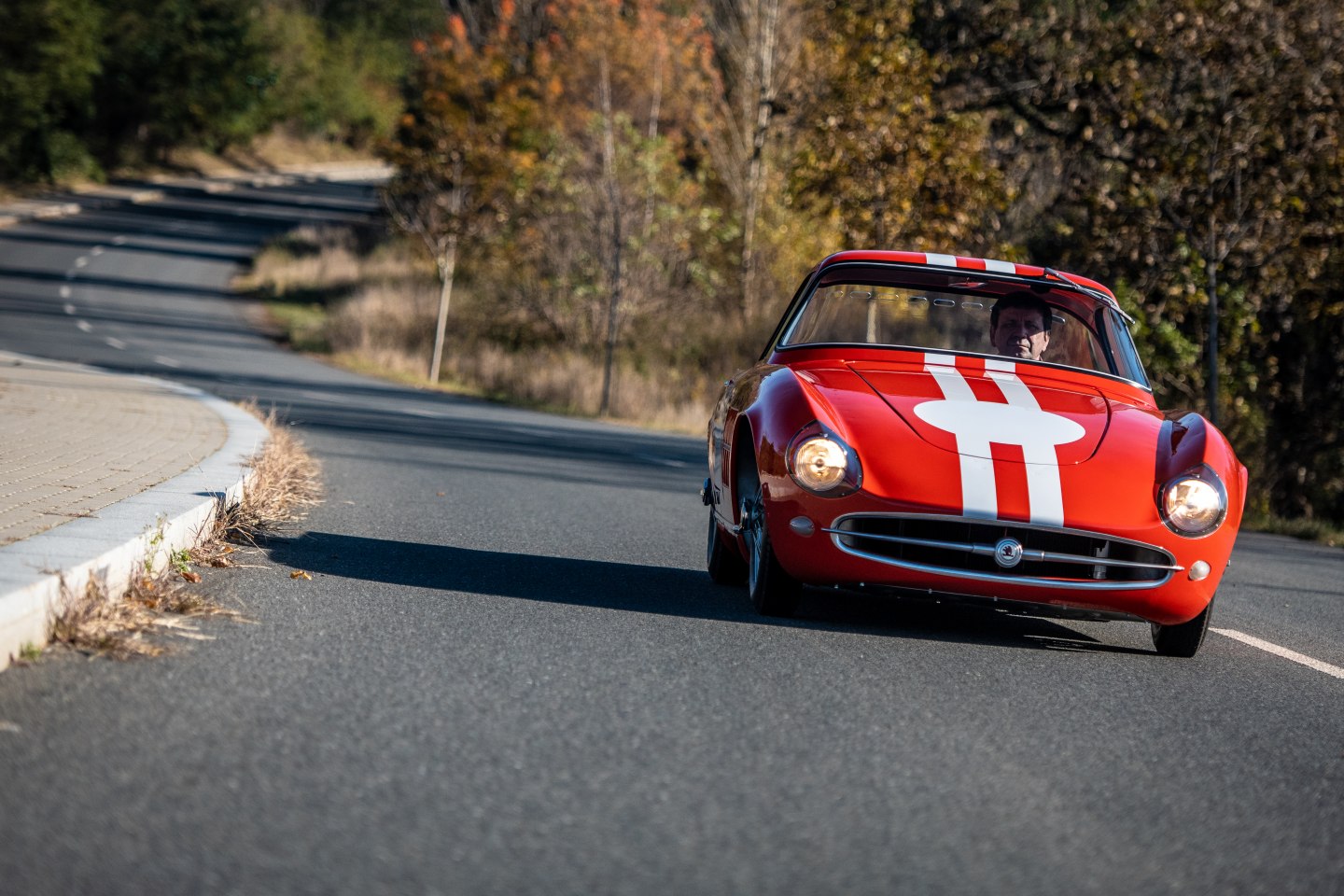 Mladá Boleslav, February 7, 2022 – To mark the 120th anniversary of ŠKODA Motorsport, employees of the ŠKODA Museum and the ŠKODA AUTO Prototype Center have collaborated on a project to rebuild the ŠKODA 1100 OHC Coupe racing car. The teams started by reconditioning the original frame, chassis and engine and rebuilt the body according to historical documentation. In the process, they used state-of-the-art technology as well as traditional body building techniques.

Planning for the ŠKODA 1100 OHC (internal type designation 968), which was primarily intended for circuit endurance racing, began as early as spring 1956. At the end of 1957, the first of two examples with an open GRP body was over. This vehicle is still one of the highlights of the exhibition at the ŠKODA Museum in Mladá Boleslav. It regularly participates in national and international classic car events. The second 1100 OHC is used by ŠKODA UK for advertising purposes, mainly at local events in the UK.

In 1959/1960, the designers continued the 968 project and created two ŠKODA 1100 OHC coupés with a closed body. Proven components from ŠKODA’s production models were used. However, unlike the ŠKODA SPORT and SUPERSPORT which were created in the late 1940s, the vehicle was no longer based on a central tube with forks for an OHV engine to be mounted in the front. Instead, the ŠKODA 1100 OHC Coupe took advantage of a lightweight but stiff trellis frame welded from thin-walled tubing. A trapezoidal suspension, consisting of two triangular wishbones arranged one above the other, was used for the front wheels, while a trailing arm coupling axle was installed at the rear.

The engine was located behind the front axle and together with the assembly unit, including the rear axle differential and the five-speed gearbox, achieved an almost ideal weight distribution. The handling of the dynamic race car was outstanding; the ŠKODA 1100 OHC Coupe was powered by a naturally aspirated inline four-cylinder engine. The cylinder and crankcase were made of aluminum and were derived from the ŠKODA 440 ‘Spartak’, as was the crankshaft. However, the race car significantly exceeded the Spartak’s output of 40 hp (29.4 kW) at 4,200 rpm thanks to its optimized combustion chambers and OHC valve drive, 9.3 compression ratio: 1, two carburettors, dual dynamo battery ignition from Bosch, Scintilla Magnetos Vertex and many other modifications. Its power was 92 hp (67.7 kW) at 7,700 rpm, with an impressive 85 hp per liter of displacement. For short bursts, it could reach up to 8,500 rpm. Depending on the overall gear ratio, which could be adjusted according to the specific circuit, the two-seater with an aluminum body and a curb weight of just 555 kg reached a top speed of around 200 km/h. Dual-circuit brakes have always provided efficient deceleration and, to reduce unsprung mass, rear drum brakes were fitted to the differential.

The racing career of the two ŠKODA 1100 OHC coupés lasted from 1960 to 1962. In 1966 they were sold to private buyers when they were no longer allowed to compete due to changes in technical regulations, which resulted in the end of the under 1100cm.3 Category. Subsequently, both coupés were destroyed in traffic accidents. The owner of the first vehicle, whose surviving components were used in the rebuild, replaced the engine from the 1100 OHC with a production four-cylinder with OHV valve timing from a FELICIA. The original engine was exhibited at the vocational school in Mladá Boleslav for a long time before it was finally installed in the rebuilt 1100 OHC coupé. The second coupe caught fire in an accident. The driver managed to escape from the vehicle, but the aluminum body was damaged beyond repair. The one-of-a-kind disassembled rear axle with integrated gearbox was part of the collection of the National Technical Museum in Prague before being donated to the ŠKODA Museum 25 years ago. The ŠKODA Museum acquired the trellis frame, which had been cut into three parts, along with the complete front axle and other surviving parts from a private collector in 2014.

A legend reborn
The ambitious vehicle restoration project would not have been possible without the experts of the ŠKODA Museum and their experience working on the open ŠKODA 1100 OHC. The original technical documentation was also crucial for the success of the project. Almost everything had been preserved in the ŠKODA AUTO archives, including an explanation of each production section and an explanatory drawing for the installation of the individual assemblies. The original mechanical components showed very little wear, as the car had only taken part in a few races. The renovation of the entire chassis, as well as a newly rebuilt radiator, fuel tank and other elements, was completed at the end of 2015.

Originally, the car’s chassis was to be exhibited in the ŠKODA Museum next to the open-body car. However, it was decided instead to rebuild the coupe as a fully functional vehicle.

The most difficult task was to rebuild the aluminum body. The original designer was former factory designer Jaroslav Kindl. The carpenters of the time built a wooden model according to his documents. A group of metalworkers hammered the aluminum panels by hand, and the individual pieces were then welded or riveted together.

Throughout the reconstruction, the team from the ŠKODA Museum Restoration Workshop worked closely with colleagues from the ŠKODA AUTO Prototype Center. Based on scans of the 1:1 scale 2D drawings, a three-dimensional grid was created, which was then visually post-processed. The shapes of the individual elements have been carefully considered and corrected, for example at the front of the vehicle and around the rear lights. Historical photographs were compared to the sketches and the 3D model. The experts were then able to view the car from all sides in the virtual studio and make adjustments. Miniature models were created, followed by models of the front and rear corners of the body in 1:1 scale. After expertise, necessary adjustments and final approval, ŠKODA AUTO engineers started working on bulkheads, wheel arches and other body elements.

The body was created from 0.8mm and 1mm thick aluminum sheets that were manually welded and shaped during the rebuild. Originally, the two coupes were unique, with an anodized finish. On the track, however, this surface treatment showed no benefit, and so both cars were painted red midway through the 1962 season.

The elaborate project to completely rebuild the vehicle required the purchase of many smaller components identical to parts used in production vehicles at the time. The exterior door handles of the coupé, for example, were the same as those of the ŠKODA 1200 “Sedan”, and some switches and the ignition lock were also used on the ŠKODA 440 “Spartak” and the OCTAVIA. The three-spoke steering wheel finished in black plastic was adopted from the best-selling ŠKODA POPULAR of the pre-war period.