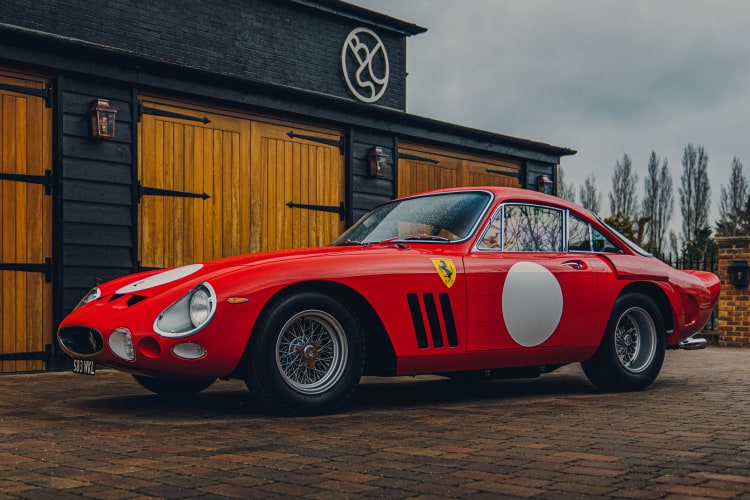 Bell Sport & Classic has proudly announced the ultimate example of its exceptional in-house restoration expertise with the authentic remastering of one of the rarest vintage Ferrari racing cars ever made, the 330 LMB.

The vision was to create the perfect, remastered 330 LMB. To achieve an authentic 330 LMB, they sought to blend originality with the latest restoration techniques and sympathetic upgrades.

This unique car was built to be used and enjoyed on the road. Based on a Ferrari 330 GT 2+2, it delivers recognition to the original 330 LMB (only four units were made over the period for competition purposes). The example has a bespoke alloy body handcrafted using model 47250 chassis – the only right hand drive example ever produced.

All components used were either correct for the period or created by the Bell Sport & Classics team of experts. The 330 LMB project is the embodiment of the company’s skills and expertise, raising the bar to new trim levels for Bell Sport & Classic restorations.

Rarer than the Ferrari 250 GTO

The Ferrari 330 LMB (Le Mans Berlinetta) was developed by British-born Ferrari racing driver and engineer Mike Parkes to compete in the 1963 24 Hours of Le Mans. His brainchild was based on the Ferrari 250 GTO but was fitted with a more powerful Colombo V-12 engine with 390 hp and 4.0 liters. It was also displayed a 20mm longer wheelbase and a redesigned aluminum body.

Only four 330 LMBs were built, three being left-hand drive and only one right-hand drive, making the deeply significant 330 LMB even rarer than the 250 GTO, with Ferrari producing nearly 10 times as many.

Three of the 330 LMBs were used to compete in the 1963 24 Hours of Le Mans. Only the example of Colonel Ronnie Hoare’s British Maranello Concessionaires Ltd team finished the race with Mike Salmon and Jack Sears taking fifth position.

During this period, Ferrari was on the verge of switching to mid-engined competition cars, making the 330 LMB the last front-engined racing car from Maranello.

“The story begins with Edward Carter, an Essex farmer who was a great Ferrari enthusiast. Ed wanted to add a 250 GTO recreation to his collection, but was turned away by one of the prominent 330 LMB experts, Terry Hoyle. Having intimate knowledge of the 4725 chassis, the original right-hand drive LMB, Terry had another idea: “There are many recreations of 250 GTOs out there – you should do an LMB instead.”

In November 2010, Ed bought a right-hand drive 1964 Ferrari 330 GT 2+2, and a vision unfolded; to make a more road worthy recreation but retaining its racing character.

The skills of RS Panels were acquired to shorten the chassis and build a body shell. In addition to the extensive photo series of the 4725 chassis, they took a trip to New York to measure and take more photos of the original 4725 car. Unfortunately, tragedy struck, as Ed Carter was in a traffic accident and lost his life in September 2015. For the next two years, the car sat idle.

Bell Sport & Classic’s core business is the restoration of vintage Ferraris, Aston Martins and Lamborghinis. They therefore saw the 330 LMB project as an excellent opportunity. More importantly, to complete one man’s vision to build what is arguably the only 330 LMB remaster in the world, but also to be able to improve upon it, creating a one-of-a-kind road car that is a mix perfect authenticity, originality, using the latest restoration techniques.

Having over sixty years of collective knowledge and experience of the Ferrari brand, the Bell Sport & Classic team were the best team to undertake the huge amount of work required to complete the project to the highest standards. possible.

The car’s fenders and roof were already attached when it reached Bell Sport & Classic, but the door skins were incomplete and the dashboard was not installed.

As is, the doors were perfect for a stock LMB. They felt super light, but they didn’t have the more substantial road car weight we were looking for..So we reworked them several times, but very subtly, reinforcing every aspect, including hinges, skins and window frames, until we got the perfect weight.

Many of the parts needed to complete the body could not be purchased anywhere in the world, at least not of the high quality that Bell Sport & Classic needed. So they decided to create them in-house.

We spent over a year researching window latches; in the end, we made them ourselves to make sure we were happy with the fit and finish. Our engineering department also made the aluminum fuel filler cap from scratch. »

As for the bodywork, the Bell Sport & Classic team fabricated many elements, including the straps and bonnet finishes. The standard Lusso windshield fitted the front of the vehicle perfectly, but they had to create the rear Plexiglas screen in-house.

They repeated the process for the headlight covers. The team first had to cut the aluminum to shape it, which they then used to develop an old one, from which they fashioned the perfectly finished Plexiglas items.

The vehicle was subjected to a complete ‘dry build’. The process allowed the team to install all trim pieces such as windshield surrounds and glass and door handles onto the bare metal bodywork to ensure the components fit perfectly afterwards. the return of the car from the paint shop.

Having reached a level of quality satisfactory to the team, the body was then given a classic Rosso Corsa red finish which took ten weeks to complete. They then added white racing roundels like the then-Maranello factory would have added before the 1963 Le Mans challenge. They also hand-painted Scuderia Ferrari emblems on each front fender.

To bring the Colombo V-12 engine to full LMB specification, the engineering department converted it to dry sump specification and increased the capacity from 2953cc to 3967cc.

“An extraordinary level of work was required to complete the process. Items such as camshafts, timing cover, water pump, oil and fuel tanks, oil filler tubes,and the caps had to be specially created for the car.

Instead of the Weber 42s that fitted the engine at the time, the six carburettors are custom controls. After the engine was completely rebuilt, it was run in and tuned on the test bench, resulting in 390 hp at 7,000 rpm and 300 lb-ft of torque at 6,000 rpm, which exactly matched the quantities he had at the time. The only specification change they made was to add a cooling fan, showing off the road bias of the car.

When the project started, they had already purchased a five-speed transmission from a Mk2 330GT from Switzerland. All of the original racing cars had four-speed gearboxes, but Bell Sport & Classic retained the five-speed unit as a sympathetic upgrade to increase the car’s handling and feel.

The drivetrain has been completely rebuilt, using purpose built shift forks and providing all new synchros and hubs. They took the whole suspension system apart and completely refurbished it. The setup had upper and lower wishbones with coil springs and telescopic shock absorbers up front.

At the rear they had a more road-focused setup with a five-bar linkage with leaf springs and an ‘auxiliary’ damper in place of the competition car’s Watts linkage and Panhard rod of time. A completely rebuilt limited-slip differential completed the setup.

Since the original 330 LMBs were designed to race at Le Mans, comfort wasn’t high on the list. They had functional cabins that were painted bare in silver Hammerite, with a wrinkle-finished dashboard and black corduroy seats.

In line with Ed Carter’s vision of creating a “GT version” of the 330 LMB, the Bell Sport & Classic team worked hard to create an interior that was correct and authentic but offered more comfort for road use.

The car’s aluminum gear level turret, which features the classic open door and tall gear lever, is exactly as it would have been when it left Maranello in 1963. Like many of the car’s other components, however, the magnificent centerpiece of the cabin was completely made from scratch, in-house.

“This remarkable 330 LMB remaster is an exceptional showcase for the incredible talent that resides within Bell Sport & Classic. The dedication they have put into this very special project over the past three years is exceptional, with each component restored, rebuilt or created from scratch, blending the very latest in restoration and engineering techniques with a selection of upgrades. friendly level.